Travis Barker is opening up about the life-altering plane crash that he barely survived in September 2008.

The 45-year-old Blink-182 drummer spoke to Men’s Health in an interview published Monday about coming to terms with his survivor’s guilt he felt after being one of only two survivors of the crash that killed four.

‘People are always like, ‘Did you go to rehab?” Barker recounted. ‘And I [say], ‘No, I was in a plane crash.’ That was my rehab. Lose three of your friends and almost die? That was my wake-up call. If I wasn’t in a crash, I would have probably never quit.’ 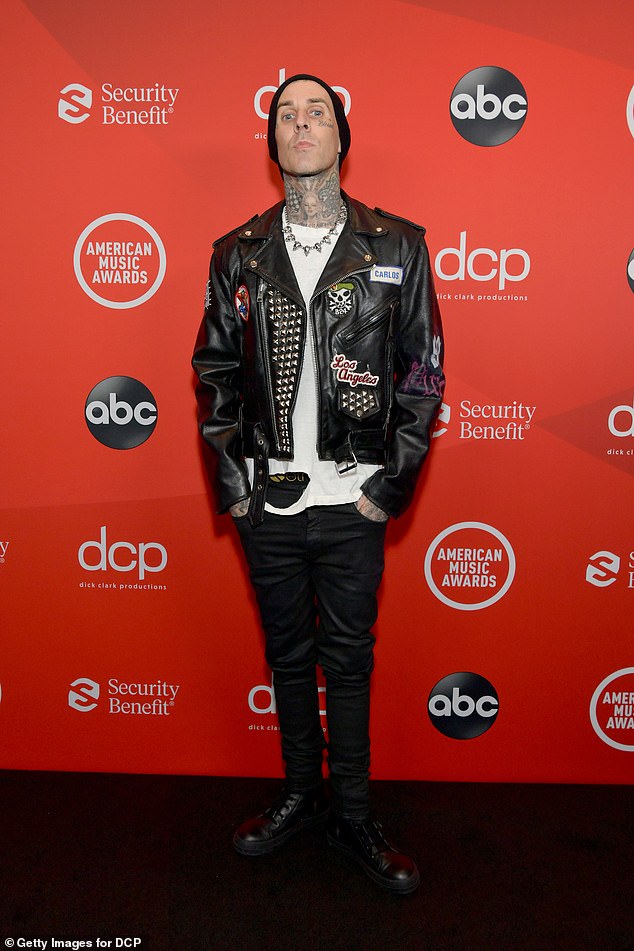 The aftermath: Travis Barker, 45, opened up about the deadly plane crash he survived in 2008 and how the shock helped him stop abusing prescription drugs even as he was left dealing with debilitating survivor’s guilt; Barker pictured in November 2020 in LA

Late at night on September 19, 2008, Barker boarded a private jet in South Carolina to head back to Los Angeles following a show, while accompanied by Goldstein, his security guard Charles ‘Che’ Still, and his assistant Chris Baker.

As the small plane was attempting to take off, it suffered a blow out from one of the tires, causing the craft to overshoot the runway, burst through the airport’s fence and over the nearby highway, and finally crash into the embankment on the side of the road.

The pilot, Sarah Lemmon, and the co-pilot, James Bland, were killed within minutes from smoke inhalation and burns as the plane burst into flames on impact, according to the Chicago Tribune. Still and Baker were also killed on impact.

Barker and Goldstein were able to escape from the burning plane via an emergency exit over the wing, but they were both engulfed in flames as they slid down the wing and were covered in burning jet fuel. 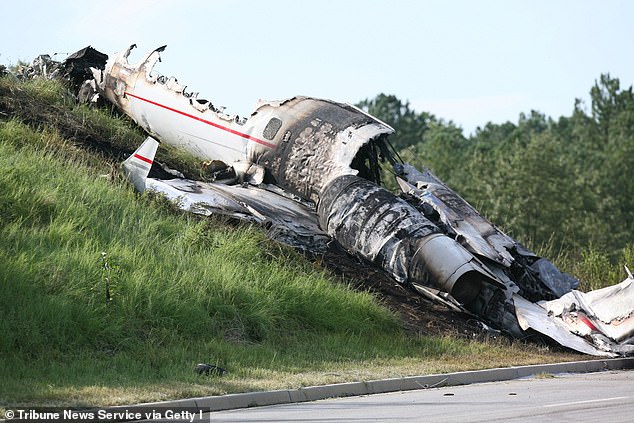 Terrifying: Barker was on a plane in South Carolina with his assistant, body guard and friend Adam ‘DJ AM’ Goldstein when a tired blew during takeoff; seen in 2008 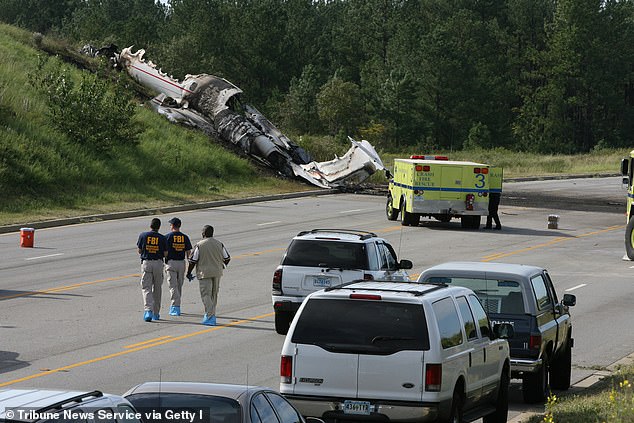 Devastating: The plane overshot the runway and across a highway and crashed into an embankment before bursting into flames. All but Barker and Goldstein were killed; seen in 2008

Goldstein was able to extinguish himself and then helped put out the flames on Barker by smothering them with his own clothing.

Barker had third-degree burns over 65 percent of his body and had to spend three months in the hospital while having 26 surgeries to repair the damage.

He recalled in the interview how he’d been using ‘an excessive amount of weed’ leading up to the crash and how he had been abusing prescription drugs.

‘People are always like, ‘Did you go to rehab?” Barker recounted. ‘And I [say], ‘No, I was in a plane crash.’ That was my rehab. Lose three of your friends and almost die? That was my wake-up call. If I wasn’t in a crash, I would have probably never quit.’

Goldstein died a year after the crash of a prescription drug overdose, which further emboldened the drummer to quit. 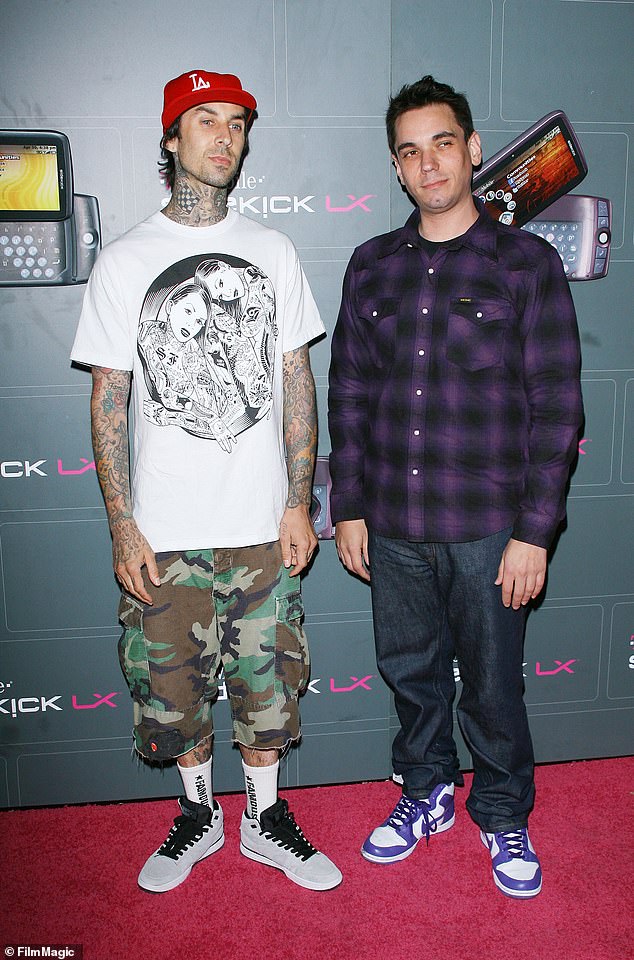 Terrible injuries: Barker had third-degree burns over 65 percent of his body, and both he and Goldstein required skin grafts; seen in 2009 in Hollywood 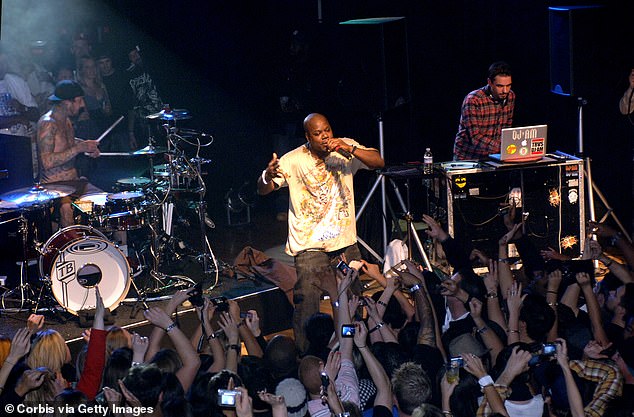 In a lonely place: A year later, Goldstein died of a prescription drug overdose, leaving Travis as the only remaining survivor; Barker and Goldstein seen with Too Short (center) in 2009

After he got out of the hospital, Barker and Goldstein would go to support group’s to recover from the trauma, but they eventually became ‘each other’s therapists.’

With the only other survivor now dead, he radically reassessed his drug use.

Because he was prescribed opioids after the crash his tolerance to the drugs rose, so he ended up flushing the pills down, ‘including stuff that I really needed.’ 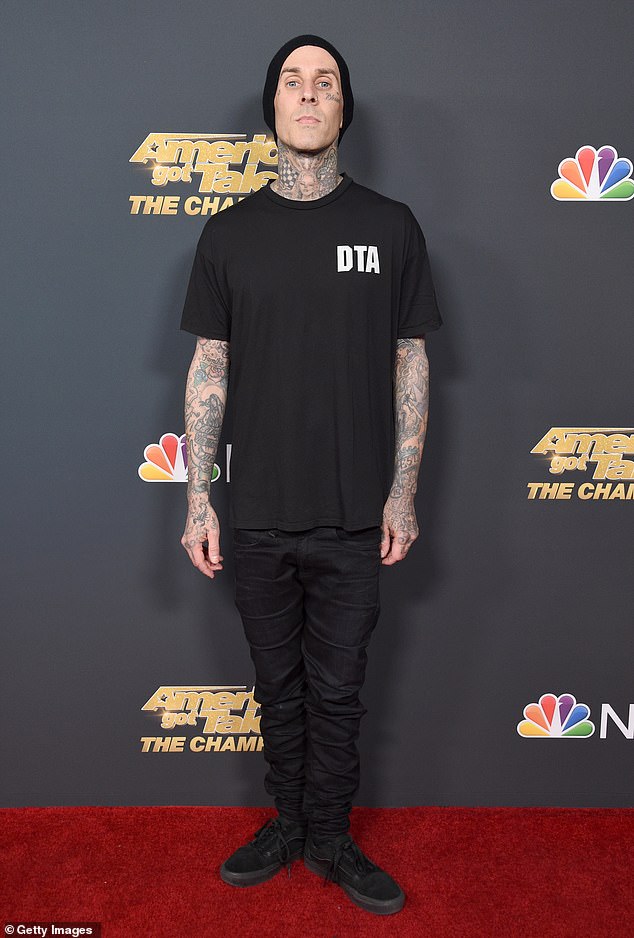 Recovery: After Goldstein’s overdose, Barker flushed his opioids down the toilet. ‘People are always like, ‘Did you go to rehab?” he recounted. ‘And I [say], ‘No, I was in a plane crash.’ That was my rehab’; seen in 2019

In the wake of the crash, Barker, who was already afraid of flying, couldn’t set foot in a plane again and began mental health issues and difficulty sleeping.

‘I was dark… I couldn’t walk down the street. If I saw a plane [in the sky], I was determined it was going to crash, and I just didn’t want to see it,’ he said.

He added that it took time for him to get distance from the crash.

‘The closer I was to it, it felt like I was closer to the bad stuff than I am to the good stuff. I felt closer to the experience of trying to escape, [to] being in an accident and being burned, trying to grab my friends from a burning plane.

‘That haunted me for a long time, and as long as I was closer to that than this good stuff, I was always thinking about that. Now it’s been so many years, it’s getting easier for me. There are days where I’ll wake up and never think about it,’ he continued. 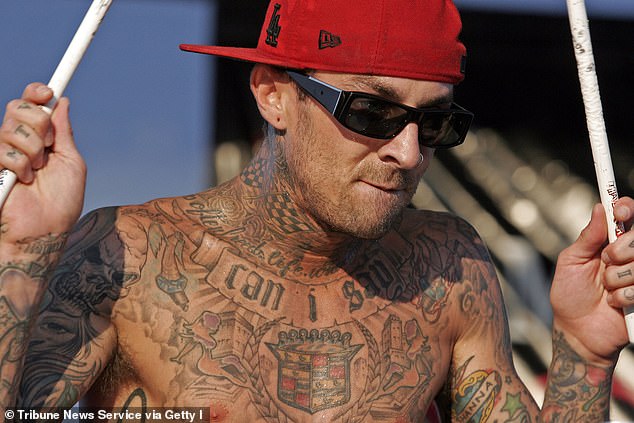 Making progress: Barker has continued to recover after being haunted by the crash for years. ‘Now it’s been so many years, it’s getting easier for me. There are days where I’ll wake up and never think about it,’ he said; seen on the day of the crash in 2008 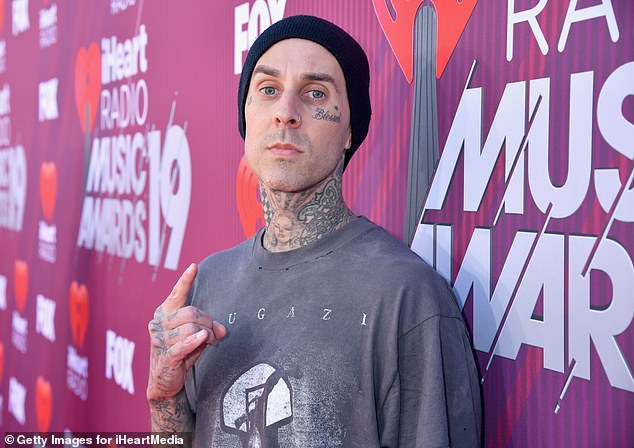 Flight fear: He hasn’t flown since but hopes to as therapy. ‘I have to,’ he said. ‘I want to make the choice to try and overcome it’; seen in 2019 in LA

More than a decade after he survived the plane crash, Barker still hopes to fly again, if only as a form of therapy.

The musician added that he yearns for the normal, everyday feeling of returning home from a plane trip.

‘If I do it, and the angels above help me in my travels and keep me safe, I would like to come back and [tell them], ‘Hey, I just flew here, and then I flew home. And everything was fine.’ I have to tell them, because I almost left them,’ Barker said, adding, ‘That’s a perfect day.’ 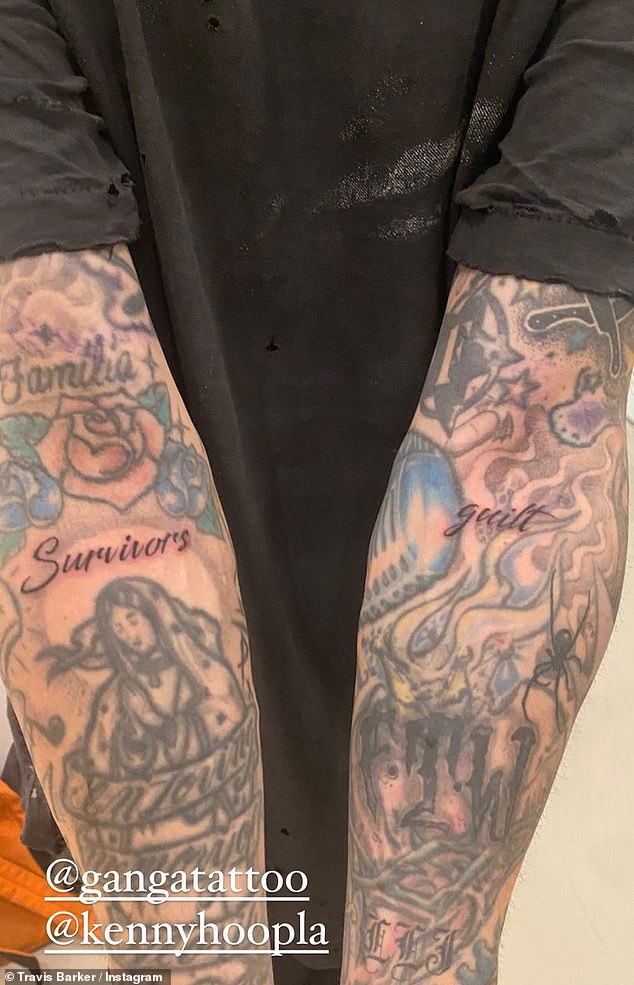 New addition: The drummer added the words ‘Survivor’s guilt’ to his arms earlier this month

To commemorate his near-death experience, Barker had the words ‘Survivor’s guilt’ tattooed on the insides of his elbows earlier this month.

Earlier this month, he added some more ink to his already covered body when his girlfriend Kourtney Kardashian inked ‘I love you’ on his arm.

However, he opted not to speak about her for his newest interview. 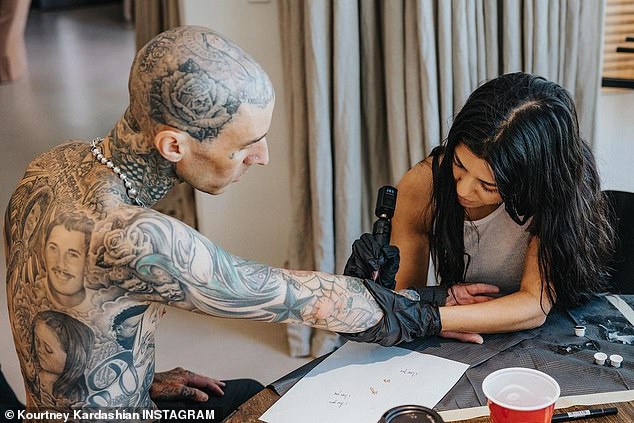 New love: he stayed mum on his new romance with Kourtney Kardashian. ‘I mean, it’s everywhere,’ he said; pictured with Kourtney in May