You know how it goes with the royal family: Members move up the ranks as they ascend the throne, titles change, and the circle of life continues. This couldn’t be more true for Kate Middleton, whose name is set to change when Prince Charles is the King of England someday…and then again when Prince William becomes king. Buckle up, because it’s time for a royal lesson!

When Kate married William ten years ago (truly where has the time gone?), she was gifted the titles Duchess of Cambridge, Countess of Strathearn, and Lady Carrickfergus by Queen Elizabeth II. Something important to know, though: Kate’s titles will change when Prince Charles becomes king, as Prince William will move up the ranks and become the new Prince of Wales. As such, it’s v likely that Kate will officially become the new Princess of Wales.

If “Princess of Wales” sounds familiar, that’s because the last Princess of Wales was Prince William and Prince Harry‘s mom Princess Diana. Technically the title could have been passed on to Camilla Bowles, the Duchess of Cornwall (aka Charles’s wife), but she actually turned down the title out of respect for Diana. 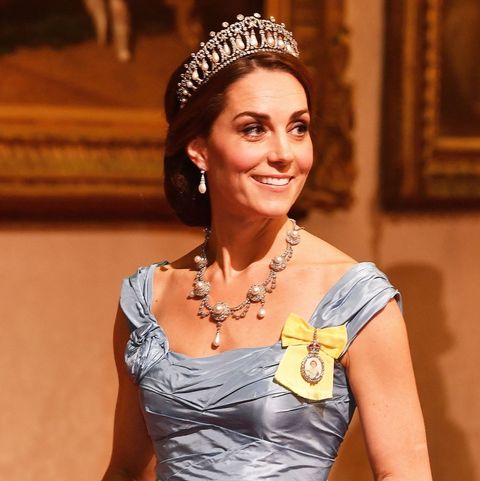 Now if we go waaaaay into the future to discuss what Kate’s title will be when William becomes the King of England, that’s where things get a little confusing. Kate will likely become Queen Catherine—BRB, dying over how regal that sounds—but she’ll actually be something called the “queen consort,” aka the partner of a reigning monarch that married into the family.

And sorry to get bleak here, but if William were pass away before Kate and their son Prince George, then Kate would have the option of calling herself “queen mother” as well, just like Queen Elizabeth II’s mom did. According to royal author Marlene Koenig, “When [Prince] George is King, she can choose to be styled as HM Queen Catherine, the Queen Mother.”

All of this won’t happen for many, many, many years, but it seems like Kate’s place within in the royal family is only going to expand from here. Can’t wait!

Starr Bowenbank
Assistant News Editor
Starr Bowenbank is the assistant news editor who writes about all things pertaining to news, pop culture, and entertainment—you can follow her here.

This content is created and maintained by a third party, and imported onto this page to help users provide their email addresses. You may be able to find more information about this and similar content at piano.io